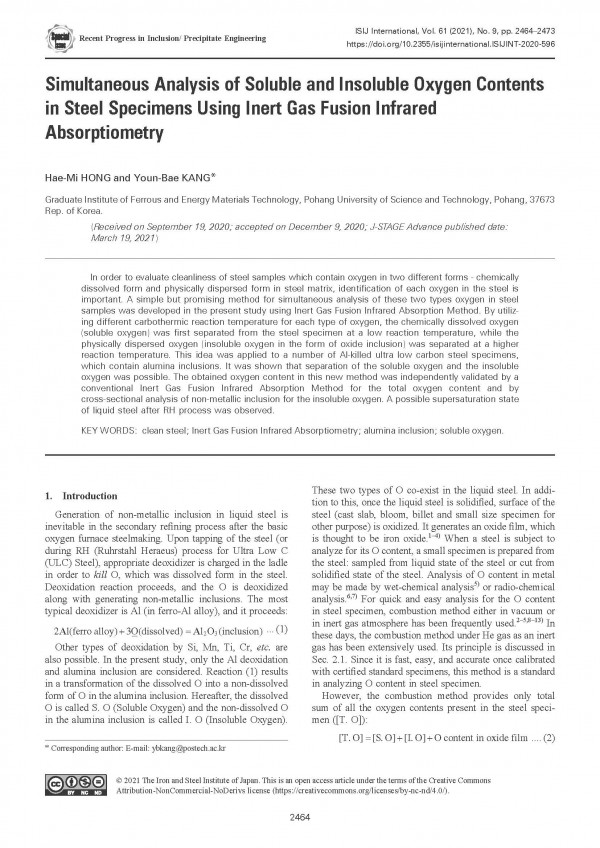 In order to evaluate cleanliness of steel samples which contain oxygen in two different forms - chemically dissolved form and physically dispersed form in steel matrix, identification of each oxygen in the steel is important. A simple but promising method for simultaneous analysis of these two types oxygen in steel samples was developed in the present study using Inert Gas Fusion Infrared Absorption Method. By utilizing different carbothermic reaction temperature for each type of oxygen, the chemically dissolved oxygen (soluble oxygen) was first separated from the steel specimen at a low reaction temperature, while the physically dispersed oxygen (insoluble oxygen in the form of oxide inclusion) was separated at a higher reaction temperature. This idea was applied to a number of Al-killed ultra low carbon steel specimens, which contain alumina inclusions. It was shown that separation of the soluble oxygen and the insoluble oxygen was possible. The obtained oxygen content in this new method was independently validated by a conventional Inert Gas Fusion Infrared Absorption Method for the total oxygen content and by cross-sectional analysis of non-metallic inclusion for the insoluble oxygen. A possible supersaturation state of liquid steel after RH process was observed.​