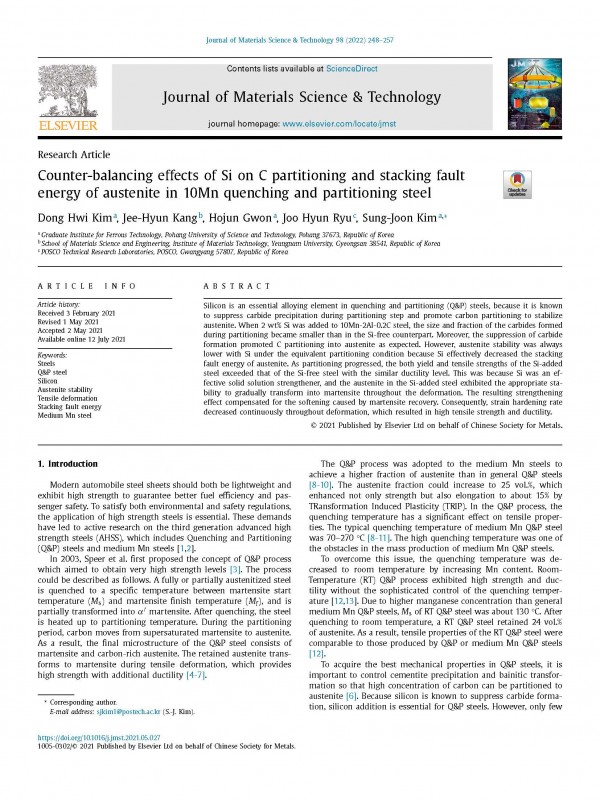 Silicon is an essential alloying element in quenching and partitioning (Q&P) steels, because it is known to suppress carbide precipitation during partitioning step and promote carbon partitioning to stabilize austenite. When 2 wt% Si was added to 10Mn-2Al-0.2C steel, the size and fraction of the carbides formed during partitioning became smaller than in the Si-free counterpart. Moreover, the suppression of carbide formation promoted C partitioning into austenite as expected. However, austenite stability was always lower with Si under the equivalent partitioning condition because Si effectively decreased the stacking fault energy of austenite. As partitioning progressed, the both yield and tensile strengths of the Si-added steel exceeded that of the Si-free steel with the similar ductility level. This was because Si was an effective solid solution strengthener, and the austenite in the Si-added steel exhibited the appropriate stability to gradually transform into martensite throughout the deformation. The resulting strengthening effect compensated for the softening caused by martensite recovery. Consequently, strain hardening rate decreased continuously throughout deformation, which resulted in high tensile strength and ductility.