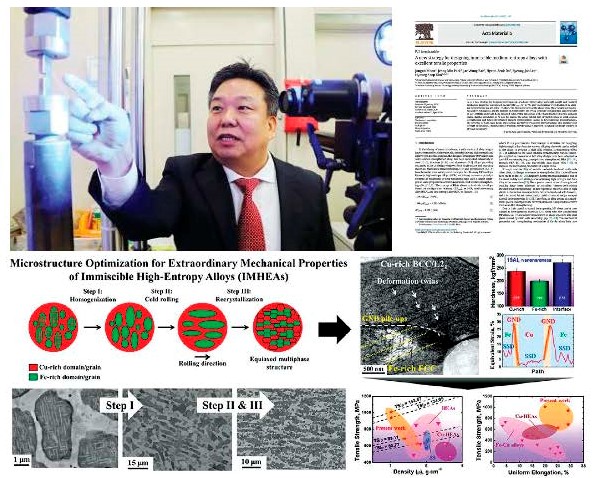 HyoungSeop Kim, JA professor (GIFT-MSE in POSTECH), and his research team have developed high-entropy alloys with high strength and flexibility.
High-entropy alloys are obtained of mixing several elements at relatively equal proportions without a main element, unlike a general alloy in which an auxiliary element is added to a main metal. Therefore, the type and content of alloying elements can be adjusted freely, and in theory an infinite number of types of high-entropy alloys can be produced. Accordingly, the strength, ductility, erosion resistance, electromagnetic properties and thermal properties of alloys have been dramatically improved.
However, most of them are made in a uniform single-phase form (structure, texture, grain size and shape are the same), and they can be expensive, because they may use expensive elements such as cobalt and chromium to maintain the single phase. The team reversed the stereotype that high-entropy alloys should be uniform. They determined that the high-entropy alloy of heterostructure*1 in which the microstructure of the alloy is not homogeneous, but had hard and soft parts. After forming two separate regions based on iron and copper that do not mix with each other (like water and oil), adding some elements that can be mixed with both maximizes heterogeneity and increases the entropy of the entire material. The high-entropy alloy made of such strong copper and soft iron has a tensile strength of 1.5 times harder than that of the existing stainless steel, and the time required to cut the material can be reduced to 1/20.
The research team explained that use of inexpensive elements such as aluminum and manganese reduces the price competitiveness compared to existing high-entropy alloys. Prof. HyoungSeop Kim said, “We are considering ways to apply them to home appliances and smartphone metal parts,” and said, “We will be able to contribute to weight reduction by applying these alloys to parts in vehicles such as automobiles, transportation passenger aircraft, and ships.
The results of this study were published on April 12 and May 21, respectively, in the international journals of metal engineering, ‘Acta Materialia’ and ‘Scripta Materialia’.”