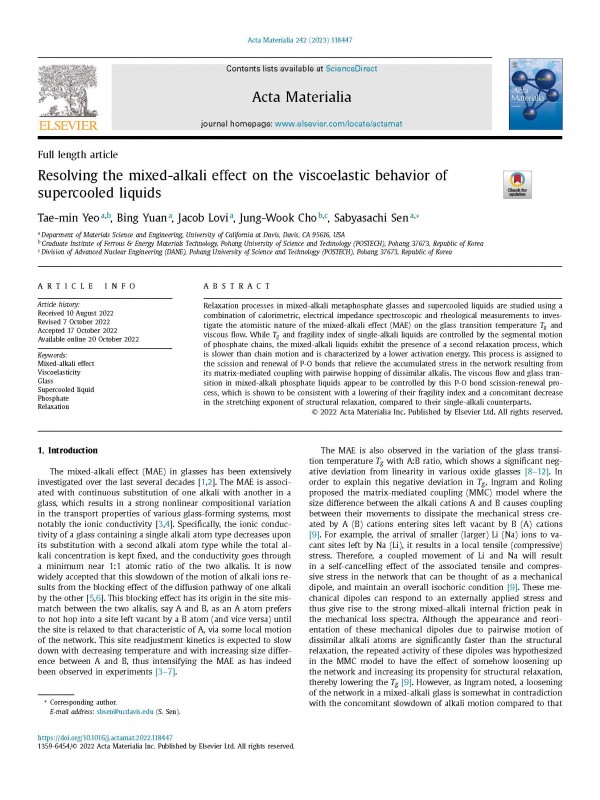 Abstract : Relaxation processes in mixed-alkali metaphosphate glasses and supercooled liquids are studied using a combination of calorimetric, electrical impedance spectroscopic and rheological measurements to inves- tigate the atomistic nature of the mixed-alkali effect (MAE) on the glass transition temperature T g and viscous flow. While T g and fragility index of single-alkali liquids are controlled by the segmental motion of phosphate chains, the mixed-alkali liquids exhibit the presence of a second relaxation process, which is slower than chain motion and is characterized by a lower activation energy. This process is assigned to the scission and renewal of P-O bonds that relieve the accumulated stress in the network resulting from its matrix-mediated coupling with pairwise hopping of dissimilar alkalis. The viscous flow and glass tran- sition in mixed-alkali phosphate liquids appear to be controlled by this P-O bond scission-renewal pro- cess, which is shown to be consistent with a lowering of their fragility index and a concomitant decrease in the stretching exponent of structural relaxation, compared to their single-alkali counterparts.