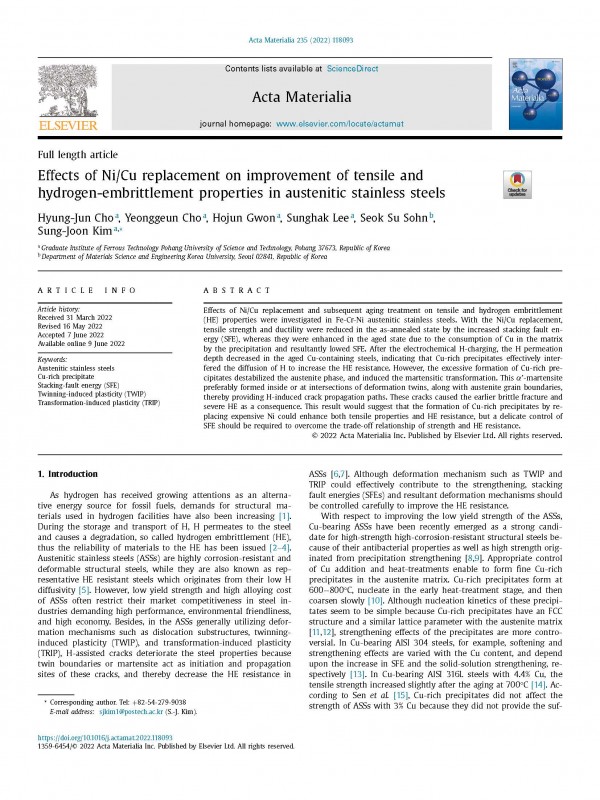 Abstract : Effects of Ni/Cu replacement and subsequent aging treatment on tensile and hydrogen embrittlement (HE) properties were investigated in Fe-Cr-Ni austenitic stainless steels. With the Ni/Cu replacement, tensile strength and ductility were reduced in the as-annealed state by the increased stacking fault en- ergy (SFE), whereas they were enhanced in the aged state due to the consumption of Cu in the matrix by the precipitation and resultantly lowed SFE. After the electrochemical H-charging, the H permeation depth decreased in the aged Cu-containing steels, indicating that Cu-rich precipitates effectively inter- fered the diffusion of H to increase the HE resistance. However, the excessive formation of Cu-rich pre- cipitates destabilized the austenite phase, and induced the martensitic transformation. This α’-martensite preferably formed inside or at intersections of deformation twins, along with austenite grain boundaries, thereby providing H-induced crack propagation paths. These cracks caused the earlier brittle fracture and severe HE as a consequence. This result would suggest that the formation of Cu-rich precipitates by re- placing expensive Ni could enhance both tensile properties and HE resistance, but a delicate control of SFE should be required to overcome the trade-offrelationship of strength and HE resistance.