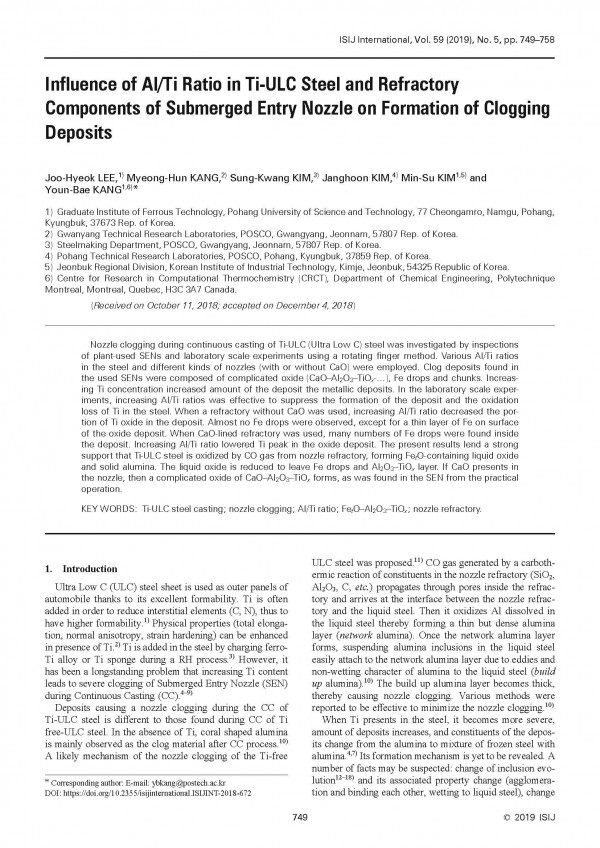 Nozzle clogging during continuous casting of Ti-ULC (Ultra Low C) steel was investigated by inspections of plant-used SENs and laboratory scale experiments using a rotating finger method. Various Al/Ti ratios in the steel and different kinds of nozzles (with or without CaO) were employed. Clog deposits found in the used SENs were composed of complicated oxide (CaO–Al2O3–TiOx-…), Fe drops and chunks. Increasing Ti concentration increased amount of the deposit the metallic deposits. In the laboratory scale experiments, increasing Al/Ti ratios was effective to suppress the formation of the deposit and the oxidation loss of Ti in the steel. When a refractory without CaO was used, increasing Al/Ti ratio decreased the portion of Ti oxide in the deposit. Almost no Fe drops were observed, except for a thin layer of Fe on surface of the oxide deposit. When CaO-lined refractory was used, many numbers of Fe drops were found inside the deposit. Increasing Al/Ti ratio lowered Ti peak in the oxide deposit. The present results lend a strong support that Ti-ULC steel is oxidized by CO gas from nozzle refractory, forming FetO-containing liquid oxide and solid alumina. The liquid oxide is reduced to leave Fe drops and Al2O3–TiOx layer. If CaO presents in the nozzle, then a complicated oxide of CaO–Al2O3–TiOx forms, as was found in the SEN from the practical operation.