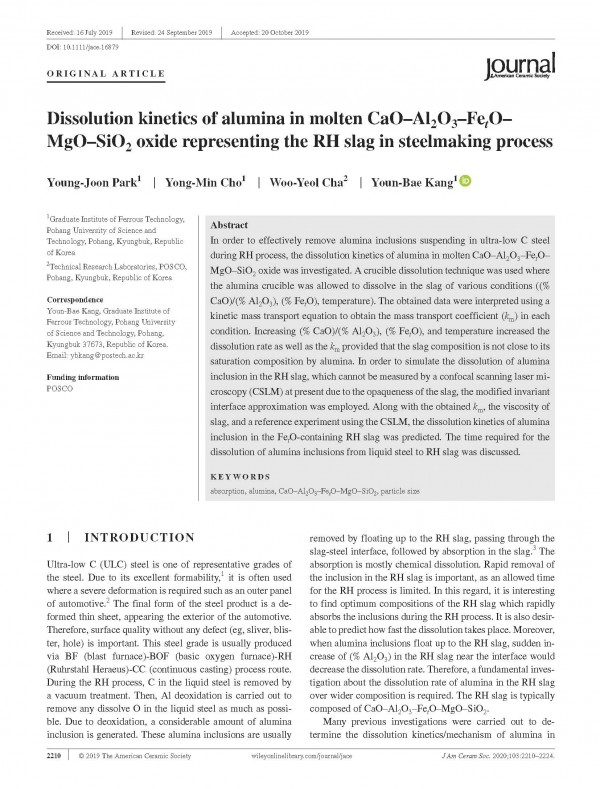 In order to effectively remove alumina inclusions suspending in ultra-low C steel during RH process, the dissolution kinetics of alumina in molten CaO–Al2O3–FetO–MgO–SiO2 oxide was investigated. A crucible dissolution technique was used where the alumina crucible was allowed to dissolve in the slag of various conditions ((%CaO)/(% Al2O3), (% FetO), temperature). The obtained data were interpreted using a kinetic mass transport equation to obtain the mass transport coefficient (km) in each condition. Increasing (% CaO)/(% Al2O3), (% FetO), and temperature increased the dissolution rate as well as the km provided that the slag composition is not close to its saturation composition by alumina. In order to simulate the dissolution of alumina inclusion in the RH slag, which cannot be measured by a confocal scanning laser microscopy (CSLM) at present due to the opaqueness of the slag, the modified invariant interface approximation was employed. Along with the obtained km, the viscosity of slag, and a reference experiment using the CSLM, the dissolution kinetics of alumina inclusion in the FetO-containing RH slag was predicted. The time required for the dissolution of alumina inclusions from liquid steel to RH slag was discussed.