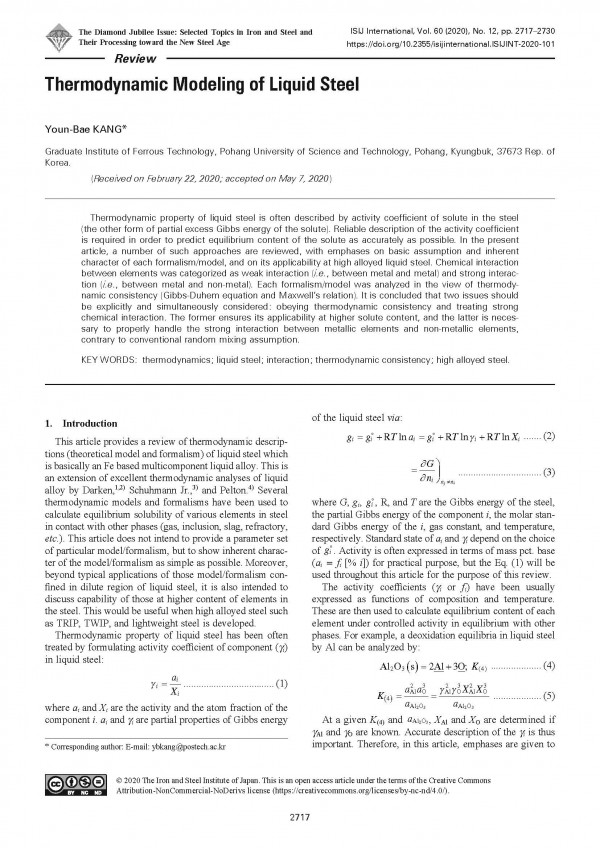 Thermodynamic property of liquid steel is often described by activity coefficient of solute in the steel (the other form of partial excess Gibbs energy of the solute). Reliable description of the activity coefficient is required in order to predict equilibrium content of the solute as accurately as possible. In the present article, a number of such approaches are reviewed, with emphases on basic assumption and inherent character of each formalism/model, and on its applicability at high alloyed liquid steel. Chemical interaction between elements was categorized as weak interaction (i.e., between metal and metal) and strong interaction (i.e., between metal and non-metal). Each formalism/model was analyzed in the view of thermodynamic consistency (Gibbs-Duhem equation and Maxwell’s relation). It is concluded that two issues should be explicitly and simultaneously considered: obeying thermodynamic consistency and treating strong chemical interaction. The former ensures its applicability at higher solute content, and the latter is necessary to properly handle the strong interaction between metallic elements and non-metallic elements, contrary to conventional random mixing assumption.​