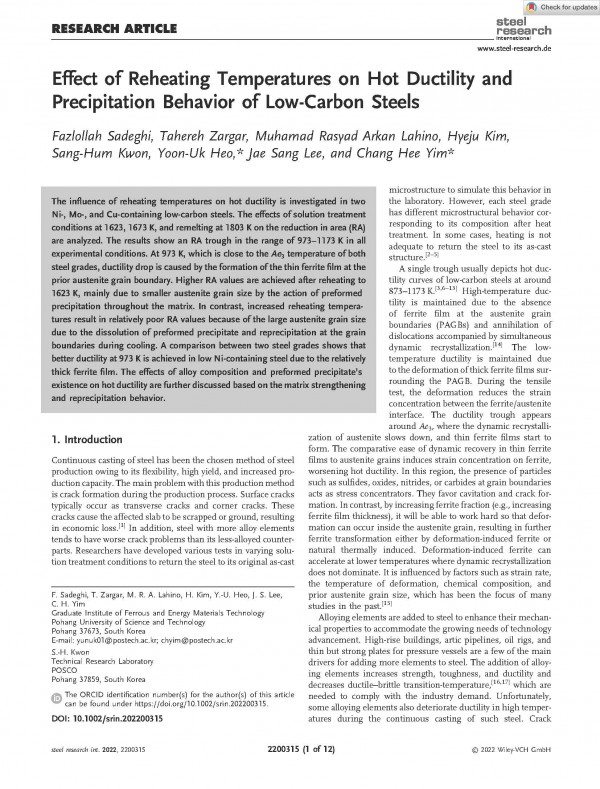 The influence of reheating temperatures on hot ductility is investigated in two Ni-, Mo-, and Cu-containing low-carbon steels. The effects of solution treatment conditions at 1623, 1673 K, and remelting at 1803 K on the reduction in area (RA) are analyzed. The results show an RA trough in the range of 973–1173 K in all experimental conditions. At 973 K, which is close to the Ae3 temperature of both steel grades, ductility drop is caused by the formation of the thin ferrite film at the prior austenite grain boundary. Higher RA values are achieved after reheating to 1623 K, mainly due to smaller austenite grain size by the action of preformed precipitation throughout the matrix. In contrast, increased reheating temperatures result in relatively poor RA values because of the large austenite grain size due to the dissolution of preformed precipitate and reprecipitation at the grain boundaries during cooling. A comparison between two steel grades shows that better ductility at 973 K is achieved in low Ni-containing steel due to the relatively thick ferrite film. The effects of alloy composition and preformed precipitate’s existence on hot ductility are further discussed based on the matrix strengthening and reprecipitation behavior.